Here at home, the Govans-Parent-Infant Center was spawned, which evolved into a state network of family support centers.  Child Advocacy remained a priority and 10 years later, the Baltimore League was the agent for the Federal Government for the National Conference on Child Advocacy and Neglect, locally. 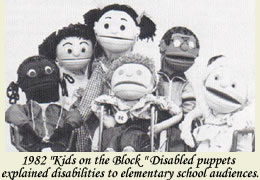 In a lighter vein, children thrilled to the inaugural Docent Program at the National Aquarium in Baltimore.  Leaguers donned wet suits and flippers to assist “residents” entertain the children.

When Arthur Feidler and his Boston Pops came to town, they filled the Baltimore Civic Center and raised $24,500 – in one night for the Baltimore League’s Community Trust Fund!  Later that year, our Larks cut their first record “Warble and Whistle” – an instant success.

In a few years, Baltimore produced its own Pops – the Holiday Pops Gala – in 1982.   This one night holiday concert at the Meyerhoff Symphony Hall soon grew into a two night musical bonanza, raising as much as $287,000 in one weekend! 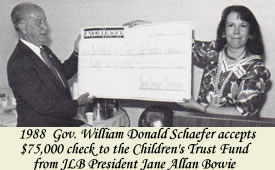 In 1987, 75 Provisionals were accepted to commemorate the 75th Anniversary of the Junior League of Baltimore and we numbered more that 675 members.  That year, Mayor William Donald Schaefer presented the League with the Governor’s Award for Outstanding Service and the Association of Junior Leagues International (as it was now known) honored Baltimore with its first President’s Award for “its commitment to advance the well being of children and helping to launch and sustain the Association’s child advocacy program”.

Diversity was the focus in the Seventies and Eighties and Baltimore’s League responded with open enrollment.  This has enabled a broad representation of Baltimore to infuse the JLB with diverse ideas, broaden its scope and enhance its service to the city of Baltimore.