1962 was, indeed, a banner year for the Baltimore League.  We had given 50 years of service to the Baltimore Community, our ranks were growing by leaps and bounds and Barbara Johnson (later Bonnell) became Baltimore’s first and only President of AJLI (Association of Junior Leagues of America, as it was known).  What a thrill!  Barbara guided AJLI with great skill, and abundance of knowledge and much aplomb.  She was such an asset to the Association and quite a credit to Baltimore.

For several years, Baltimore had run the Senior Citizens Hobby Show, which effectively highlighted the contributions of our older generation.  And, in 1964, the League began working its magic at the Metropolitan Senior Citizens Center.  Located in the basement of a downtown church, this association led to the Junior League of Baltimore’s indelible impact on a increasingly, important segment of America’s population. 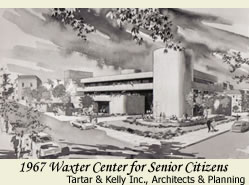 The League decided that seniors should have a specialized center of their own.  They entered into the arena of public policy and lobbied voters to pass the Waxter Center Bond Issue.  The Issue was successful and ground was broken in 1971.  Today, the Waxter Center for Senior Citizens stands as a lasting monument to the women of the Junior League of Baltimore, who so unselfishly give of themselves, in order that others may have a better life.

The League was now firmly entrenched in the Baltimore Community.  It was lauded not only for its service, but also for its parliamentary acumen and city officials and corporate executives sought its expertise.

Everyone loved the “Return the Returnable” bottle campaign, which was highly successful and paved the way for today’s re-cycling program. 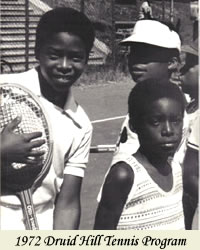 Nationally ranked tennis pros electrified fans at the Baltimore International Indoor Tennis Championships and from the first serve, it was a winner, netting more than $200,000 for the League’s community projects.  We even made the cover of the Baltimore Metropolitan Telephone Book!

Members could now become Sustainers at age 45.  When the League started, women became honorary members at 28!

Baltimore was on the cutting edge with its Drug Education and Environmental programs during the 70’s.  “Tommy Tummy” deplored the ills of drugs and became a television star.  We also took to the airwaves with our environmental program, “Noise is Loud”.

In 1976, Baltimore hosted “For Children’s Sake”, a National Child Advocacy Training Institute.  Attended by 500 League delegates from all over, it had a renowned faculty of 82.  This Conference impacted Leagues across the country.  It spearheaded a move within the Association to address the rising tide of child abuse and related traumas suffered by our young and defenseless citizens.  Ever since, Baltimore delegates attending League conferences have been greeted with, “You’re from Baltimore.  I remember your Child Advocacy Conference.”

The Junior League of Baltimore is an organization of women committed to promoting voluntarism, developing the potential of women, and improving communities through the effective action and leadership of trained volunteers. Its purpose is exclusively educational and charitable.