During WW II, we once again rallied around our soldiers at the front.  Nothing was too much and Leaguers poured their efforts into “Blankets for Britain” and gave parties for soldiers at Ft. Meade.  Numerous hours were spent manning booths to recruit WAVES and a Women’s Officers Lounge was opened. 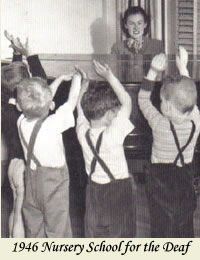 At the conclusion of WW II, Baltimore returned to the needs at home.  At the request of the Public School System’s Department of Special Education, Baltimore’s Junior League opened a Nursery School for Deaf Children.  A child-learning program was given to facilitate the youngsters’ adjustment to life.  Fundamentals of speech and lip reading were taught and six years later, the nursery school was taken over by the city school system.

The long running Children’s Theatre Bureau introduced the Puppets in 1947.  These hand-made characters brought tears and laughter to all who saw them and in 1970 altered their repertoire and costumes to concentrate on pediatric wards as the Pre-Surgical Puppets.

It was in 1947 that Elizabeth Seiler took the reigns of Baltimore’s Junior League.  Her tenure witnessed a Regional Conference held in Baltimore and the start of a Public Relations Committee.  Twenty years later, she watched her daughter, Betsy McDonald, assume the Presidency.  Together, they formed Baltimore’s only Mother-Daughter Team. 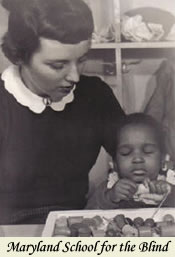 The Junior League of Baltimore opened a Nursery School for Blind Children at St. David’s Church in 1952.  This program taught little ones to cope with their peers and to manage in a sighted world.  This nursery school, the only one of its kind at the time, was later assimilated into the Maryland School for the Blind.

Baltimore’s school children “Oh’ ed and Ah’ed as League Docents guided them through the Maryland Historical Society and the Baltimore Museum of Art in 1950.  These tours were just another facet of our efforts to brighten life in the city.