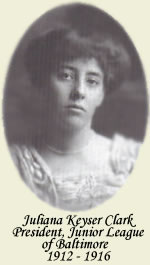 On April 22, 1912, Miss Goodwillie and her colleagues established the Junior League of Baltimore – the fifth such League in the country. Dues were $1.00 and the membership soon reached 147! They very shortly began work on the Flower Mart, which involved them for 55 years.

The young members, many from families where community service was a way of life, quickly immersed themselves in their mission, “to promote voluntarism and improve conditions through trained volunteers”. And, they established an office at 7E. Mulberry Street.

Soon the roar of WW I was heard across the Atlantic and Baltimore’s members rallied for the cause. Thirty-two dollars was sent to the American Hospital in Neuilly, France; $5,160 was raised from the sale of forget-me-nots for the benefit of Belgian babies; the now 216 members formed the Red Cross Hostess Hotel at Evergreen for families of blind soldiers and many even worked in munitions factories. Our Baltimore League was also well represented abroad with members in the Junior League Unit of France and the Red Cross.

In 1920, Baltimore held its first National Conference of Junior Leagues. The Junior League of Baltimore was now quite a viable force in the city. Its members were recognized for their commitment, their professionalism and their results. Therefore, they felt quite confident in establishing, in 1920, their first project – The Community Kitchen and in holding their first fund-raiser – The Junior League Frolic, which raised $2,400!

Hands-on projects and lively benefits characterized the Junior League of Baltimore in those early years.  The Children’s Theatre Bureau, a “Colored Ward” at Kernan Hospital and the Children’s Aid Society received their devoted attention, while the Follies, the Poverty Ball and a Tea Room enabled them to support these projects.

Music became synonymous with the Junior League of Baltimore, when the Glee Club trilled its first note in 1930.  This was during the tenure of Peggy Waxter.  Peggy presided from 1929-1931 and, at 95, is our oldest living member.  Peggy is active on Boards throughout Baltimore and, in her own words, became “a born again Junior Leaguer in 1978”, when she was asked to rejoin Baltimore’s Board of Directors.

The Glee Club evolved into the Monotones and much later in 1961 became the Larks.  The Larks continue to chirp away today – to the utter delight of audiences and as the perennial ambassadresses of the League. 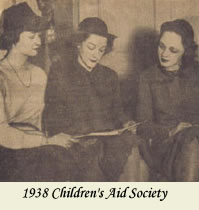 The Thirties saw the establishment of an Occupational Ward at Kernan Hospital and Two Curative Workshops – at John Hopkins and the University of Maryland hospitals.  These projects offered the same occupational therapy, that the government so successfully employed in rehabilitating the wounded after WW I.  This was yet another example of the caliber of service rendered by Baltimore’s Junior League.  Absorbed into the respective hospitals’ programs, they foreshadowed Occupational Therapy as we know it today.

Another project, Santa Claus Anonymous was a joint venture with the Baltimore Junior Association of Commerce, which lasted for 27 years.